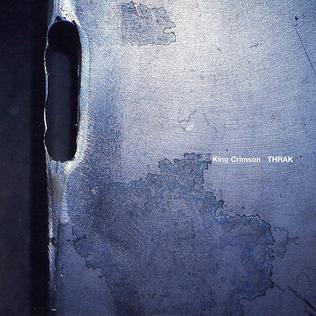 To claim that VROOM and THRAK – companion releases from 1994 and 1995 – constituted a full-force return from King Crimson after a long silence would be to risk a dramatic understatement. In a career characterised by fiery explosions of sound and unexpected artistic detours, the consecutive EP and full-album releases feature some of the most consistently extreme music in the entire King Crimson catalogue.

More on this anon – but first a little context. In a band history that has been characterised by a pattern of intense activity followed by lengthy hiatus, the 1981-84 version of the band was short-lived yet remarkably productive. Eschewing the earlier, more classically progressive repertoire, the early ‘80s line-up – which saw group founder and sole mainstay, guitarist Robert Fripp joined by guitarist/vocalist Adrian Belew, bassist Tony Levin and drummer Bill Bruford – adopted a more concise but equally adventurous approach to composition and recording.

Comprehendible in a post-punk context of bands such as Magazine and Talking Heads (with whom Belew had previously toured and recorded), the KC of this era was nonetheless possessed of its own distinct sonic character and musical chemistry. All phenomenally gifted players, KC developed an almost telepathic level of interplay on stage – and, unlike some other phases of KC, they also managed to translate this to record. The beautifully playful and inventive Discipline (1981) remains the pick of this line-up’s three studio albums, but the subsequent Beat (1982) and Three of a Perfect Pair (1984) also have their share of sublime moments.

With all four members always engaged in parallel solo projects and session work, King Crimson lapsed into another extended bout of inactivity, and it wasn’t until the early ‘90s that Fripp began to consider a reunion – this time guided by his vision of a Double Trio with two guitarists, two bassists and two drummers. So it was that after various additional members were considered, the ‘80s quartet of Belew, Bruford, Fripp and Levin were joined by drummer Pat Mastelotto and Trey Gunn, who in addition to fretted and fretless basses was also an acclaimed exponent of the Warr Guitar (American-made ‘touch’ guitar that combines both bass and melodic strings on a single fretboard) and Chapman Stick (10 or 12 stringed instrument that can be used to play bass lines, melody lines, chords or textures).

If VROOM saw the new formation finding their way into a potentially fiercesome new sound, THRAK was the full, 56-minute fruition (several tracks from the EP reappear in new versions). It’s hardly surprising that the expanded line-up – and, in particular, the addition of a second drummer – should serve to ratchet up the sonic impact of the ‘80s KC; but nothing in that line-up’s repertoire could prepare listeners for the untrammelled, trouser-flapping power of THRAK.

The opening pair of linked tracks, VROOM and Coda: Marine 475, do a fair job of setting out THRAK’s stall – chunky, near-metallic constructions that also herald a welcome return by the mellotron to KC’s instrumental palette. But it is the first (relatively) conventional song, ‘Dinosaur’, that really pins back the ears – a chewy six-and-half-minutes of surprisingly accessible choruses and scorched-earth guitar solos. It’s an instant-classic addition to the core KC repertoire, and unsurprisingly proved to be a live favourite for many years afterwards.

It is not, however, the most extreme moment on THRAK – not by a long way. That honour falls to the frankly brutal ‘Sex Sleep Eat Drink Dream’, placed near the end of the track-listing and probably unsettling many first-time listeners with its complex time signatures and nightmarish instrumental sections. It’s a bizarrely compelling listen and absolute confirmation – should it have been required – that KC remained entirely relevant in the mid ‘90s, more than 25 years after its first studio recordings.

Lest anyone think that THRAK is exclusively an exercise in sonic trauma, it should be noted that the middle section of the album contains some of the band’s more poised, melodically-gifted material. It’s hard not to feel the guiding hand of Belew behind the exquisitely airy ‘People’ and ‘Walking On Air’, with the latter being one of the most conventionally gorgeous entries in the KC catalogue.

Beautifully recorded during six weeks of sessions at Peter Gabriel’s Real World Studios, THRAK would be followed by extensive global touring. But there were some creative and personal differences (especially between Fripp and Bruford) in the six-piece line-up, whilst its sheer size meant that it was always economically problematic. So it was with a more compact configuration minus Levin and Bruford that KC returned to the studio in 2000 to record The ConstruKction of Light and, a few years later, The Power to Believe and Happy with What You Have to Be Happy With EP.

Another lengthy hiatus ensued before the 2013 emergence of a three-drummer line-up that has led to some of the most ecstatic notices of the band’s five-decade live career. Having initially focused on the late ‘60s and early ‘70s repertoire, the band now successfully amalgamates material from all phases of its history into what is effectively a retrospective show – albeit one that throws up plenty of fresh sparks and features a reasonable dose of new material . By all accounts, this particular ensemble – which sees guitarist Jakko M. Jakszyk take over vocal duties from Belew – is also the happiest of the band’s many formations.


Too often lumped in with the prog mainstream when in fact they are a far stranger, more eclectic creation than that term implies, King Crimson is simply one of the most interesting bands in any genre – period. Discipline and 1974 power-trio-led Red are more accessible entry-points for the new listener, but if you want to be sure you can handle anything this beautifully visceral band can throw at you then THRAK should be your first point of call.
at April 02, 2018