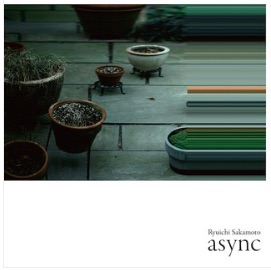 A journalist once remarked of a later Bryan Ferry album – in a not entirely positive sense, it must be said – that his latest creations were less akin to songs than “exercises in tonal resonance”. My interpretation of this comment is that Ferry had become more fixated on textural production and studio finesse than traditional concerns such as melody. Certainly, in the case of Ferry, an admitted perfectionism has led to some fairly anodyne results along with plenty of fantastic moments. But for Ryuichi Sakamoto, async’s relative eschewing of conventional structures and melodies in favour of intensely atmospheric – and often just plain intense – assemblages of digital and analogue keyboards, sudden blasts of noise, voice samples and natural world sounds has given rise to an unblemished triumph.

async is by turns meditative and deeply unsettling – an apposite combination for a man who was diagnosed with and treated for throat cancer during the early stages of work on this, his 16th solo album. Inevitably, the episode was to profoundly inform the composition of async, with Sakamoto discarding his original sketches in favour of (as he remarks in the album’s liner notes) the concept of “a soundtrack for an Andrei Tarkovsky film that does not exist”. Long-term followers of Sakamoto’s work will not be surprised to discover that he has been drawn to Tarkovsky, whose films – which include the original version of sci-fi classic Solaris and the extraordinary late-period work The Sacrifice, wherein a middle-aged intellectual seeks to bargain with God to prevent an impending nuclear armaggeddon (see it – no, really!) – are often highly contemplative and bordering on the mystical.

Although there are a few guests (including spoken word contributor and long-term collaborator David Sylvian) and percussion and string ensembles on a couple of tracks, the vast majority of the sounds are created by Sakamoto himself. The album begins as it means to go along – viscerally – with ‘andata’, in which an acoustic piano and pipe organ are steadily submerged beneath a tidal wave of noise. Like much of async, it is difficult not to perceive this as an awakening with regard to personal and collective mortality, although one should be wary of interpretations that are too literal.

Broadly speaking, the more accessible compositions are clustered at the start and end of async. Between times there is a sequence of varied and occasionally disturbing textural pieces, of which ‘walker’ is perhaps the most affecting. Electronic swooshes and blasts of unidentifiable noise augment the heavy, rather boggy-sounding footsteps of the eponymous walker on his her or way to… well, who knows? (The other unspoken question here, of course, being 'which of us really does?') Lasting a mere four minutes but feeling like it could easily go on for four times as long, ‘walker’ is testament to Sakamoto’s ability to shape a simple but striking mood.

Both a careful further evolution of Sakamoto’s ambient soundworld and – structurally at least – something of a marked departure from his previous music, async is an extraordinary piece of work. Hardly built for the daily noisy commute, it is instead an album surely best enjoyed late at night, alone, and in a calm and centred mood. But make no mistake, it is not ambient music as that term is generally understood; the sounds and textures explored here are likely to take the listener to a far more intensely reflective mental place.

async was released in 2017 and has now been supplemented by an almost equally compelling album of interpretations by artists including Oneohtrix Point Never, Christian Fennesz and late film score composer Jóhann Jóhannsson, whose sudden death at the tragically early age of 48 was announced in February 2018.


Fortunately, Sakamoto appears to have indefinitely delayed his own appointment with the inevitable, having made a complete recovery from cancer. Once again, the prolific musician and composer – always one of the most questing of his generation – is involved with a host of solo, collaborative, movie soundtrack and live projects. Doubtless there is much, much more to look forward to from Sakamoto, but for now async takes its place among the most inventive and emotionally compelling of his remarkable career.
at April 06, 2018