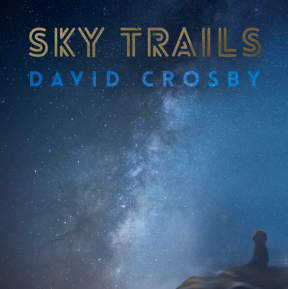 By any standards the last five years have been phenomenally productive for the estimable David Van Cortlandt Crosby. Having said goodbye to Crosby-Nash, Crosby Stills & Nash, Crosby Stills Nash & Young and other permutations thereof amid no little personal acrimony and a profound weariness with the apparent fate of the ‘heritage’ act to “turn on the smoke machine and play the hits” once again (as he remarked during his recent interview with Alec Baldwin for the excellent Here’s the Thing… podcast) Crosby charted a course for a considerably more exciting renewed solo career in the company of mainly younger musicians, notably his son and keyboardist/producer James Raymond, and bassist/Snarky Puppy mastermind Michael League.

The result has been an extraordinary sequence of albums, to date comprising Croz (2014), Lighthouse (2016) and Sky Trails (2017), but one that shows no sign of abating as Crosby has been back in the studio in NYC in recent weeks to record another new album. Crosby’s own earlier struggles with addiction have been (very) exhaustively documented, but suffice to say that in later life he has evidently found a genuine contentment – something underlined in many recent interviews – that has paved the way for a sustained creative renaissance.

The first song on the first of these releases, Croz, provided a strong indication of the resonant songwriting and gorgeous playing and singing that were to come. Structured around a long, uncoiling melodic figure enhanced with glistening pedal steel and perfectly measured transatlantic guitar overdubs from Mark Knopfler, ‘What’s Broken’ is a stunning opening statement of intent. The creative silence that had endured since Crosby’s last release (as part of CPR) in 2001 was finally over, and the distinctive Crosby melodic/harmonic music/life-force was back in full effect.

On the 10 ensuing songs Crosby, Raymond and producer Daniel Garcia established a meticulous, textured production aesthetic that has permeated all of his recent releases. An unsurprising focus on Crosby’s solo and harmony vocals – still in remarkably fine form in his mid ‘70s – is typically augmented by deep-soak synths and intricate layers of acoustic and electric guitars. Few verses are exactly the same, with new sonic embellishments at each pass lending colour and underlining the obvious time and attention that has been lavished on these recordings. Bar to bar, there is always something new to delight the ear, from the telegraphic-style guitar parts that course through ‘Dangerous Night’, to the sprightly jazzy shuffle that underpins lovely album closer ‘Find A Heart’.

After such an extended studio layoff, Crosby was understandably buoyed by the enthusiastic reaction to Croz and embarked upon a series of tours that – in a welcome contrast to many of his peers – have emphasised his dynamic new material just as much as the older perennials. The related surge of interest in his work also brought Crosby into contact with some of the most exciting younger players, not least Snarky Puppy – the frequently jaw-dropping jazz/rock collective (just check their album with the Metropole Orkest and conductor Jules Buckley, Sylva) – and their regular collaborator, the gifted jazz/folk singer/songwriter Becca Stevens (best first listen: recent album Regina).

Here were sympathetic creative talents, eager to press ahead with ambitious new music, and it was in the company of Stevens and League that Crosby crafted his 2016 album, Lighthouse. This release was more pared-back, reflecting League’s desire to construct a song-sequence primarily around vocal stacks and acoustic guitars in an echo of Crosby’s 1971 solo debut, If I Could Only Remember My Name.

More topical than its predecessor – Crosby’s compassionate, lifelong Democratic credentials evident in his lyrical focus on the dispossessed and marginalised – Lighthouse arguably features some of Crosby’s best-ever vocal performances. The stacked vocal sections on ‘Look In Their Eyes’ might well stop you in your tracks; the more instrumentally expansive ‘The City’ finds Crosby and League’s voices blending seamlessly. A gorgeous effort all-round, not least because of the cover photo by Eduardo Teixeira de Sousa, Lighthouse was a guaranteed shoe-in for end-of-year album lists.

No sooner had Lighthouse been released than Crosby was immersed in sessions for another full-band album, this time produced by Raymond. Arguably the finest of the three recent LPs, Sky Trails was released six months into the Trumpian reign of horror – a subject about which Crosby remains bleakly comic in his regular Twitter epistles – and urges a return to empathy and love amid depressing global times. But lest that sound a little too worthy, the album also features a handful of his strongest-ever melodies and some sublime 'in the pocket' ensemble playing, perhaps best sampled on the Steely Dan-esque, horn-tinged opener ‘She’s Got To Be Somewhere’ and exquisitely arranged, righteously angry ‘Capitol’.


Next up is a reunion of the Lighthouse line-up for an album that Crosby is tracking ahead of another extensive tour this summer. With so many of his contemporaries having abandoned the studio altogether (not entirely unreasonably, it must be acknowledged, given the catastrophic impact of streaming on artist income), Crosby’s continued creative renaissance is something to be treasured. It is evident that he remains utterly infused by the joy of creating new music, and is also aware of its critical importance as a tonic to these profoundly dispiriting times. Long may he, and his wonderful collaborators, go on lighting up the darkness.
at May 09, 2018 No comments: